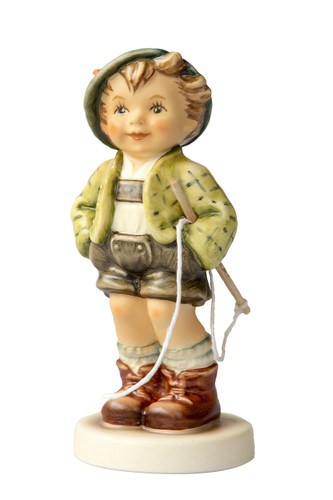 This new M.I. Hummel figurine welcomes springtime and honors the tradition of festival going as he joyfully sets off for a traditional celebration.  Festival Tradition is an M.I. Hummel lad bringing along his whip to participate in the typically Bavarian pastime of Goasslschnalzen.

The whip the boy is holding is based on a famous game in Germany. Among the most interesting regional customs common in springtime is Goasslschnalzen, a loud and rhythmic cracking of whips, performed in unison. Goasslschnalzen developed in centuries past as carriage drivers used elaborate whip cracking to announce their approach. Although the carriages are gone, the custom remains with concert-like performances of whip cracking. Goasslschnalzen and has even become a competitive sport in Bavaria.