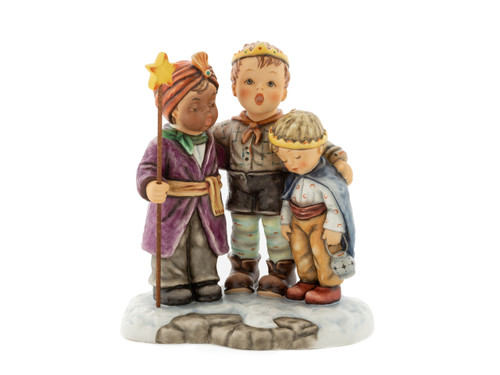 Every year during the Christmas Season, carolers make their rounds through the Catholic parts of Germany. The children, dressed as the Three Wise Men - Caspar, Melchior, and Balthazar - are always eagerly awaited. They sing songs and give their blessing, which is written on the door Frame with chalk, so that the house and its inhabitants are safe from harm. That's why you can see "20*C+M+B +19" written on the door frame where the carolers have already visited.

Several thousands of carolers, not only in Bavaria, but also elsewhere, collect annual donations for children in need - often despite snow and the biting cold. The Hummel Manufaktur created the expressive figurine “Carolers” as an homage to the world's largest act of solidarity. The diligent Hummel children are the product of the cooperation of several of our sculptors, contributed to the creation of the figurine. The result is an impressive, lively figurine.

Our small carolers have already been out and about for a while: the smallest of the Wise Men is tired and leaning on the biggest of the group, his container of frankincense is weighing down his arm. The tallest protectively lays his hand on the back of his fosterling, who he is supporting. He is singing his song with fervor. The third of the group, Caspar, anxiously looks at the small, sleepy friend. Will he make it through the last round?