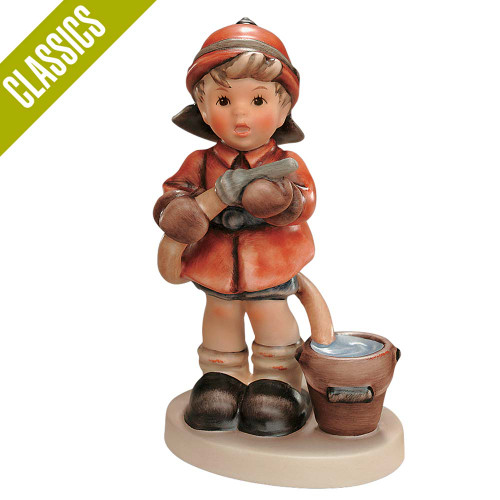 Firefighters play such an important role in all of our communities and towns. Pay tribute for all of their bravery, life-saving and heroic efforts with heart-warming figurine. He is ready for the siren to sound, dressed in his red jacket, helmet and boots while holding the fire hose. Firefighter, modeled by master sculptor Helmut Fischer in 1977 was not released in the United States until 1999.

It carries a "First Issue 2000 Millennium" special backstamp in the first year of production. In the wake of the terrorist attacks on the World Trade Center and Pentagon, Goebel donated a select group of figurines to the Local Chapters to be raffled off. All proceeds from the raffles would then go to benefit families of the victims. The select group of figurines included patriotic/medical/firefighter/police and emergency support personnel themes. Firefighter was re-leased in 2012 in the "Innocent Reflections" series, a series of white ceramic figurines on which a coating of 21-karat gold was painted on certain details. The gold highlights featured on this figurine are the helmet, hose nozzle and handle on the. Firefighter is making its return as part of the Classics Collection. Made in Germany.