Classic from the Kitchen - SchwarzwäLder Kirschtorte

A combination of sweet, rich chocolate and the tangy taste of cherries – it’s truly a recipe for happiness! The classic German confection, known as Schwarzwälder Kirschtorte, or Black Forest Cake, is believed by some historians to date back nearly 500 years to the sixteenth century, when chocolate, then very expensive, was first baked into cakes and cookies.

The Black Forest or Schwarzwald region of Germany is located in the southwest, bordering France and Switzerland, in the state of Baden-Württemberg. It's a land of mountains and pine forests so dense that the sun barely penetrates. It’s also known for cuckoo clocks, fairy tale villages, and Kirsch or Kirschwasser a clear, double-distilled brandy made from the sour Morello cherries grown in the region. No one knows for sure who first married the German passion for chocolate with the tantalizing taste of Kirsch – but Schwarzwälder Kirschtorte most likely takes its name from that popular brandy. And there has been a regional form of the dessert combining cherries, cream, and brandy from the earliest days. There is some speculation that the women’s costume of the Black Forest might have inspired the dessert – the skirt is black, like chocolate, the blouse is white like cream, and the hat is adorned with red pompoms, definitely reminiscent of cherries! 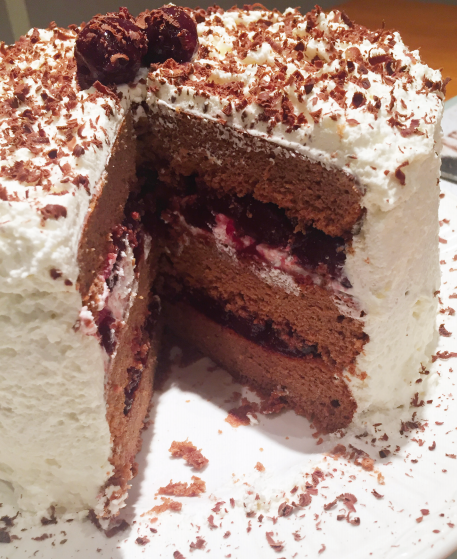 Black Forest Cake is chocolate layer cake with some delicious surprises. In the traditional recipe, the dense chocolate sponge cake is moistened with Kirsch syrup, then layered with whipped cream and Kirschsoaked Morello cherries. More cream and dark cherries go on top, along with a generous sprinkle of shaved chocolate. If you don’t have a good German bakery or restaurant nearby that makes this classic dessert, perhaps you’d like to try it yourself. We offer a recipe from the Convent of Siessen, with slight modifications for American kitchens.

from the Convent of Siessen, modified for American kitchens

Ingredients for the cake (for three layers):

Ingredients for the filling and icing:

Directions for the cake:

Directions for filling and icing: