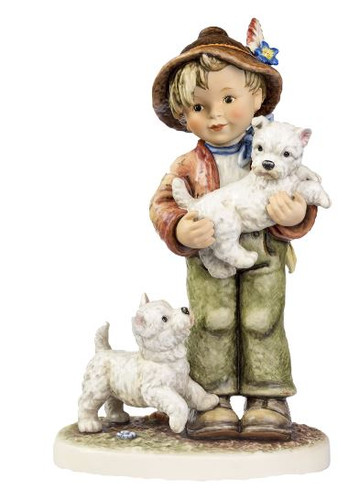 This impressive figurine is truly an honor to a human’s best friend, the dog. Dogs are amazing animals. Just like children, dogs have the magic to bring a smile to your face. Whether you had a special childhood dog in your home or just have fond memories of fun with a canine companion this figurine is the perfect way to capture those special moments. Master Sculptor Marion Huschka was the creator behind this figurine. According to Marion, it was a unique challenge to position the characters in the right angle so that the observer feels the connection and communication between them. Due to the size of the figurine, accurate detail work is vital, which means each element of a masterpiece figurine needs to be painstakingly worked out in much more detail than with a smaller figurine.

This is why the Frisky Friends figurine consists of 24 parts, which are poured into 24 individual molds. When you look in the eyes of the boy, you see four eye lashes instead of typically 3 - a characteristic of the larger Hummel figurines. A total of 26 colors has been used to paint this figurine over 32 individual steps to bring the colors to life in a beautiful way. For example, when painting the jacket, a specific technique was used where multiple colors are applied wet at the same time to give a more realistic appearance. The darker color was applied on the collar of the jacket and on the crook of the arm to guarantee a lively appearance and to give the jacket a used character typical of an active child’s play clothes. A similar technique was used on the pants.

Additionally, the dogs were sprayed uniquely to give the fur a more natural appearance. For example, the hind legs were sprayed with a soft yellow color underlying the other colors. Nothing has left to chance! Not only did the molding department use reference photos to create real looking Westies (West Highland White Terrier) but also the painting department used reference books to tease out and replicate the exact color and structure of the dogs. Frisky Friends Masterpiece figurine also features extra details you expect from Hummel craftsmanship such as the beautiful flower in the hat of the Bavarian boy.

The larger size of the Masterpiece figurine means that weight is a challenge throughout the whole production process. The figurine is made very strong to be assembled and painted and shipped to your home ready to display alongside your other Hummel collection pieces. By the time “Frisky Friends” leaves the factory to become part of your home, it has been handled over 4,000 times by sculptors, painters, and artists bringing it to life just for you!

Made in Germany. Masterpiece 2017.