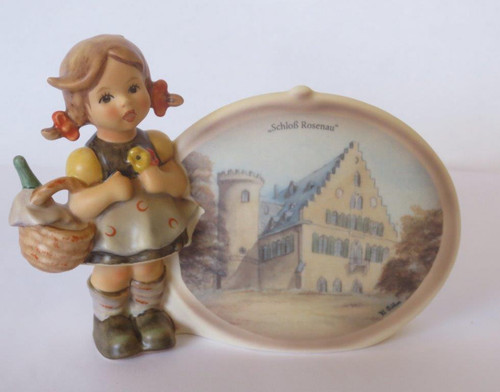 Our Little Visitor girl and Adventure Time boy with their baskets of goodies are ready to explore a new Bavarian castle. They are traveling to the Schloss Rosenau, called in English The Rosenau or Rosenau Palace. The Rosenau is a former castle, converted into a ducal country house, between the towns of Coburg and Rödental, formerly in Saxe-Coburg, now lying in Bavaria, Germany.

Schloss Rosenau is perhaps most notable as the birthplace and boyhood home of Prince Albert of Saxe-Coburg and Gotha, who in 1840 became the consort of Queen Victoria of the United Kingdom of Great Britain and Ireland. The main fabric of the Rosenau is a medieval structure which was first built at some time before 1439, when it is recorded as a possession of the lords of 'Rosenawe'.

This gorgeous palace is a castle straight out of a fairytale, and we've brought it to life in stunning detail in these fabulous collector's plaques.