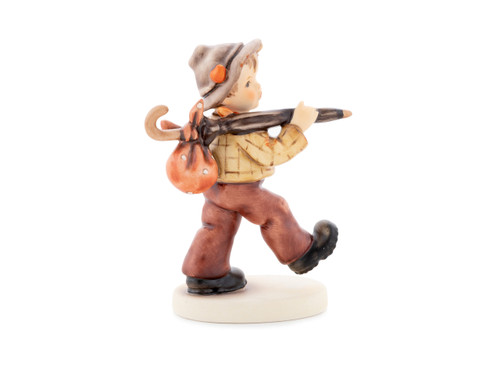 He walks confidently along, a song on his lips. Hair sticks out under a floppy hat. You can see that the hat is not new; the little hiker has had it a while. What makes the hat so special is the heart at the edge. The little guy has put an umbrella over his shoulder, a red scarf with white dots hangs from it. It contains a small snack for the road. His clothes are casual, he strides along with a scarf and sturdy shoes.

That’s how Kerstin Griesenbrock from the Hummel Club team describes HUM 908, “Gone A Wandering”: “It looks like the boy has a longer way to go. He is ready to get started. With good cheer, with joy and confidence, he puts one foot ahead of the other”. “I see my two boys in him,” explains the mother of two. “They’ve started out on their own paths and I wonder if I’ve given them everything they need. The love that is carried in the heart, the snack, which consists of courage, confidence and a joy in life, and sturdy shoes to be well-prepared to go their own way.”

This charming figurine, limited to only 4,999 pieces, makes a meaningful gift with a message for children of your own.