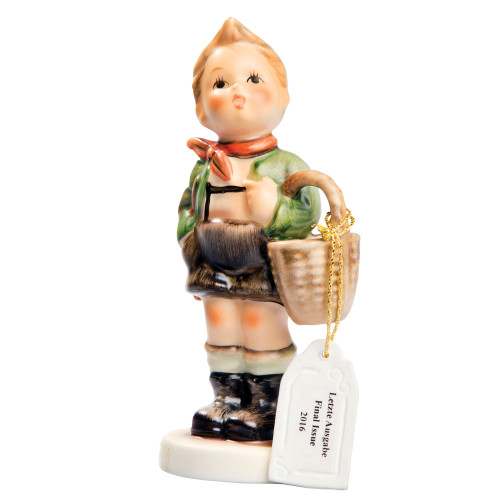 In the countryside of Bavaria, this young boy, dressed in traditional lederhosen and boots, is often seen on his way back and forth to the village marketplace. Carrying his woven basket, he walks along a familiar cobblestone street which will take him to his destination. Once he arrives at the market he will collect fresh vegetables, baked goods and meats for his families dinner. Village Boy was first modeled in 1936 by master sculptor Arthur Moeller. Made in Germany.

Village Boy has been produced in six size variations and has appeared in at least one size under Trademarks 1-8. Many of these sizes have been temporarily withdrawn over the years. The most important variation occurred under Trademark 1 (Crown Mark), in which the boy wears a blue jacket and a yellow kerchief instead of the normal green jacket and red kerchief.
Four variations (4.00, 5.00, 6.25 and 7.25 inch) will be produced in 2016 and will include a special "Final Issue" backstamp under Trademark 10. At the end of the production year, all molds will be destroyed.
• In the smallest, 4.00" version, the boy tilts his head directly upward and his boots are planted flat on the ground.
•In the mid-sized, 5.00" version, the boy twists his head to the side while pointing his chin upward. His boots turn up slightly at the toe.
•In the larger, 6.25" version, the boy's gaze is more direct, his bandana curves outward, and his boots turn up at the toe.
•In the largest, 7.25" version, the boy gazes upward, his hair is swept high, his bandana sticks out straight, and his boots curl up quite a bit at the toe, revealing tan soles.
All versions will be produced in 2016 under Trademark 10 with a Final Issue Backstamp. At the end of the production year, all the molds will be destroyed.