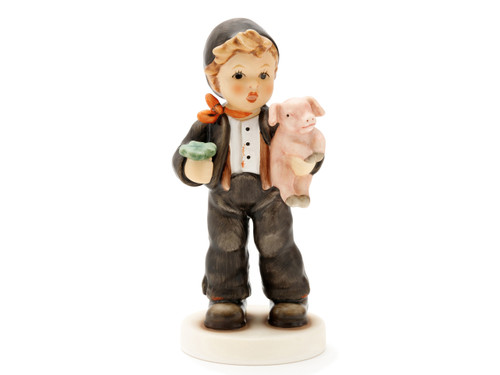 The luck series has arrived. You are the lucky one!

As you can see, luck has many facets. And now it's on its way to you, too. A new Hummel series with the theme of luck is being launched. "My Little Horseshoe" shows a young girl pressing a horseshoe to her heart. "Feelin’ Lucky" is a chimney sweep carrying a pig in his arms and holding a shamrock in his hand – quasi a triple dose of luck! We hope you will welcome these figurines into your home and bring an extra dose of luck into your life! The Hummel sculptors Anette Barth and Tamara Fuchs, together, created the first two figurines of the new luck series. Anette modeled "My Little Horseshoe" and paid particular attention to the design of the horseshoe – it had to be carefully sculpted, but not covered by the girl’s hand. This particular detail was carefully modeled with great care. You will like that!

Seventeen colors make up the beautiful color design of the figurine. When painting the curls, the paint is applied with different levels of pressure, which creates different strengths in the brushstrokes. "Feelin’ Lucky" presented Tamara some challenges as she modeled the figure, because she had to add more elements. Nine different molds were needed. The result is a particularly precious figurine, for a number of reasons, but especially since after 82 years this is only the second chimney sweep to be released as a figurine. For the chimney sweep’s deep black suit, the painters use special shading techniques to achieve a realistic, three-dimensional effect. The lucky pig's face gets its perfect look with the help of a fine feather brush.