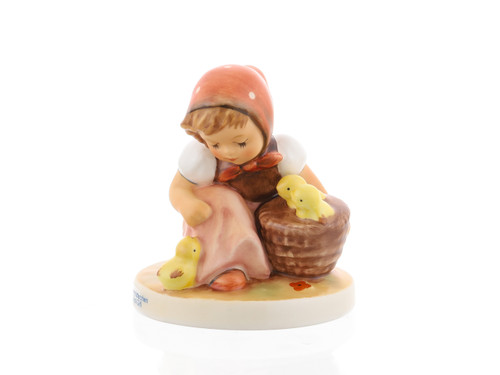 Who can resist a small little yellow fluffy baby chick? Chick Girl has gathered three in her woven basket and has bent down to scoop up one more before it gets away. One can just image the joy these little ones bring to this little girl. Chick Girl has been produced in many mold types and sizes, beginning in 1936 when it was first designed by master sculptor Reinhold Unger.

In 1964 it was re-sculpted by master sculptor Gerhard Skrobek. In the past it has been called Little Chicken Mother and The Little Chick Girl. One of the most value samples of Chick Girl includes a bowl/pot, which was produced in 1936 but never placed into production. The biggest mold variation shows a different number of chicks on the base. Mold 57/0 (3.50 inches) has two chicks, while mold 57/I (4.25 inches) has three. Chick Girl is making its return as part of the Classics Collection. Made in Germany.