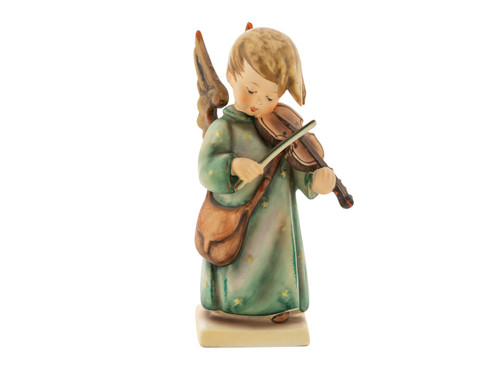 What could the violinist be playing? It must certainly be a heavenly sound. Reinhold Unger created this Figurine in 1948, and the one in this size has not been changed since then. Gerhard Skrobek and Maria Müller modelled a smaller Version of this classic in 1983.

Hummel figurines have been made by hand in Germany, as the label says, since 1935, in Rodental in Franconia. The Hummel factory base their figurines on German Franciscan Sister M. I. Hummel's original sketches. Born Berta Hummel in the Bavarian town of Massing, Maria Innocentia Hummel completed her education at the Academy of Arts in Munich with top grades. Her sketchss of children, which she saw in everyday situations, at play or in nature, are world-famous. Only the Hummel Factory is authoirzed to use Sister Hummel's sketches as a template and Inspiration for figurines.