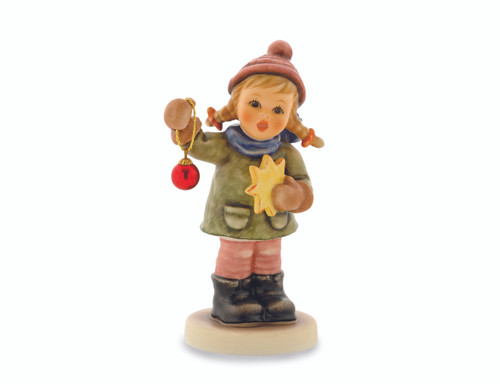 This joyful young girl is ready for spread some holiday cheer. She is patiently waiting for her chance to hang her shiny red Christmas ball on her families' tree and place her gold star on the tippy top. Holiday Fun brings back warm and cherished memories of small children helping to decorate for the holiday season. Holiday Fun Orb was sculpted by Tamara Fuchs and released in the fall of 2004 as part of the "Bavarian Christmas Market Collector Set."

The figurine is a mixed media figurine and has a small ornament hanging from her hand. The set has the "2004 Holiday Edition" and "holly" backstamps. In 2011 to mark the 75th anniversary of Sister Hummel's legacy, Manufaktur Rodental selected 50 figurines to bear a special "75th Anniversary" backstamp; Holiday Fun was included in the anniversary series. Only 75 of these figurines were available in North America. Each figurine was hand-numbered and had a golden backstamp.